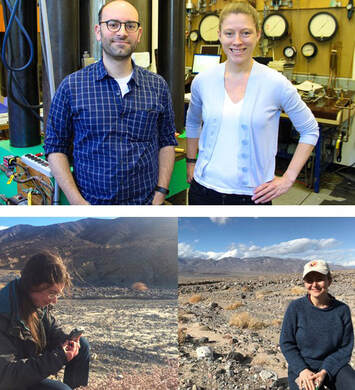 The Office of the President has selected two new Carnegie Venture Grants. Peter Driscoll of the Department of Terrestrial Magnetism and Sally June Tracy of the Geophysical Laboratory were awarded a venture grant for their proposal Carbon-rich Super-Earths: Constraining Internal Structure from Dynamic Compression Experiments. Plant Biology’s Sue Rhee and Global Ecology’s Joe Berry and Jen Johnson were awarded a Venture Grant for their project Thermo-adaptation of Photosynthesis in Extremophilic Desert Plants.

Carnegie Science Venture Grants ignore conventional boundaries and bring together cross-disciplinary researchers with fresh eyes to explore different questions. Each grant provides $150,000 support for two years with expectation of novel results. The grants are generously supported, in part, by trustee Michael Wilson and his wife Jane and by the Ambrose Monell Foundation.

The Peter Driscoll/Sally June Tracy project is an interdisciplinary opportunity for an early career materials physicist, Tracy, to work with an early career geodynamicist, Driscoll, and for a postdoc to gain expertise in both fields using novel high-pressure techniques that inform new models.

The explosion of extrasolar planet discoveries has raised new questions about the formation, evolution and the habitability of planets. The mantles of carbon-rich super-Earths, exoplanets up to about 10 Earth-masses, are thought to be rich in silicon carbide (SiC), while the cores are believed to be rich in iron/iron-carbide.  However, there are obstacles in modeling the internal structure and thermal evolution of such planets because of poor constraints on material properties at the extreme pressure-temperature conditions of planetary interiors. The duo, with a postdoc, seeks to overcome this problem with new high-pressure experiments that will inform new models. Peter Driscoll and Sally June Tracy are shown in the lab.

The Sue Rhee/Joe Berry/Jen Johnson project brings together ecophysiology, genomics, systems biology, biochemistry, and modeling to provide new insights into the high temperature limits of photosynthesis, which is particularly critical as we face a changing climate.
​
Photosynthesis is exquisitely sensitive to temperature. Across the range from 10° to 50°C (50°F to 122°F), all higher plants exhibit a distinctive thermal optimum for photosynthesis. As the warming of the climate intensifies, photosynthesis will be pushed toward the inhibitory part of the temperature response. However, it is a mystery what chain of molecular events causes the high temperature inhibition. In this project, the team aims to understand the molecular basis of photosynthetic performance at high temperatures using comparative studies of Tidestromia oblongifolia, a heat-tolerant plant native to the Mojave Desert, and Amaranthus hypochondriacus, a closely related but heat-sensitive cereal crop native to cooler climates. Team members Karine Prado, a postdoc in Plant Biology and Global Ecology is shown left, while Jen Johnson, research associate in Global Ecology is on the right.