How Seeds Know It's a Good Time To Germinate 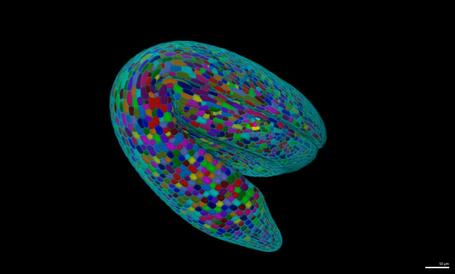 A 3D reconstruction of an Arabidopsis embryo. Different colors are used to annotate different cells. Image is courtesy of George W. Bassel
Palo Alto, CA--Dehydrated plant seeds can lay dormant for long periods—over 1,000 years in some species—before the availability of water can trigger germination. This protects the embryonic plant inside from a variety of environmental stresses until conditions are favorable for growth and survival. However, the mechanism by which the baby plant senses water and reactivates cellular activity has remained a mystery until now.

New work jointly led by Carnegie’s Yanniv Dorone and Sue Rhee and Stanford University’s Steven Boeynaems and Aaron Gitler discovered a protein that plays a critical “go, or no-go” role in this process—halting germination if the soil’s hydrological conditions are less than ideal or allowing it to proceed if the chances of survival are good. Their findings have major implications for understanding plant ecology in a warming world and for the possibility of designing drought-resistant crops that can survive climate change and fight world hunger.
Their work is published in Cell.

“Despite the extraordinary toughness of many seeds, plants are still at their most vulnerable during this stage of their lives, because germination must be precisely timed to ensure the greatest chance of survival. Once germination starts, the plant cannot go back into its hibernation state—the genie can’t be put back in the bottle,” Dorone explained. “So, a protein like FLOE1 is crucial to a plant’s ability to walk the tightrope between too soon and too late.”

The key to FLOE1’s capabilities is a recently discovered biophysical phenomenon that’s a hot research topic right now called phase separation. This mechanism allows cells to dynamically compartmentalize biomolecules into membrane-less assemblies, rather than cordoning them off in a cellular organelle surrounded by a membrane.
“Think of an organelle as an office building where components of the cell are assigned to complete their physiological jobs; whereas, these phase-separation-enabled assemblies are more like a maker faire or hackathon, where proteins can come together to accomplish a task and then disburse when it’s complete,” Rhee said.  “We found that FLOE1’s ability to very quickly initiate this type of temporary gathering is crucial to its functionality.”

When a dormant seed senses moisture in its proximity, FLOE1 almost instantaneously assembles in the cell to test the waters, so to speak, and determine whether the conditions are good for the seed to reactivate and start growing. Because the FLOE1 aggregation is temporary and reversible, it can act as a go or no-go signal, halting germination if water availability is determined to be less than optimal, or allowing it to proceed if the environment has enough water to support successful growth.
“We believe that this is the first study that provides information on how seeds can directly perceive their hydration state and act upon it,” Rhee added.

The authors say that their discovery could lay the groundwork for engineering crops that are able to harness FLOE1’s abilities in order to withstand the detrimental effects of climate change.  This type of enhancement will be increasingly important to combat hunger around the world.

Although their work was conducted using the experimental mustard green Arabidopsis thaliana, Dorone, Rhee, Boeynaems, and Gitler found found that FLOE1 is present throughout the plant kingdom, even in plants that precede the evolution of seeds, meaning it could play many additional roles in plant cellular physiology, which could have additional bioengineering potential.
​
“What’s more, FLOE1 is the first known protein to reversibly phase separate over hydration-dehydration cycles, but it’s likely that similar processes occur in other organisms that have desiccated periods of dormancy, including human pathogens,” Dorone concluded.
​
Other collaborators on the research team were: Eduardo Flores and Shahar Sukenik of University of California Merced; Janice G. Pennington and Marisa S. Otegui of University of Wisconsin Madison; Emiel Michiels, Mathias De Decker, Katlijn Vints, and Pieter Baatsen of KU Leuven; George W. Bassel of University of Warwick; and Alex S. Holehouse of Washington University in St. Louis.

​​View on Carnegie Website
This work was funded by the U.S. Department of Energy, U.S. National Science Foundation, a Stanford Graduate Fellowship in Science and Engineering, the Carnegie Institution for Science, Brigitte Berthelemot, EMBO, and the U.S. National Institutes of Health.