​How Do Plants Act Fast To Fight Off Infections? 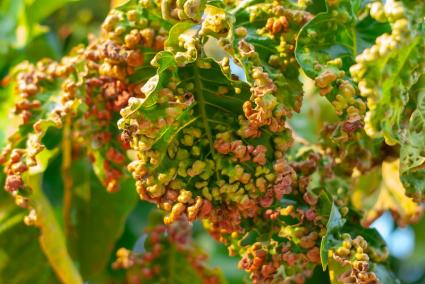 Canker disease, a virus caused by sucking insects, gives the leaves of this plant their bent and distorted appearance. Image purchased from Shutterstock.
Palo Alto, CA--New work led by Carnegie’s Kangmei Zhao and Sue Rhee reveals a new mechanism by which plants are able to rapidly activate defenses against bacterial infections. This understanding could inspire efforts to improve crop yields and combat global hunger.

“Understanding how plants respond to stressful environments is critical for developing strategies to protect important food and biofuel crops from a changing climate,” Rhee explained.

Published in eLife, new work from Zhao and Rhee, along with Carnegie’s Benjamin Jin and Stanford University’s Deze Kong and Christina Smolke, investigated how production of a plant defense compound called camalexin is activated at the genetic level.
“Because plants grow in a fixed location, they can’t flee from predators or pathogens,” Zhao explained. “Instead, they’ve evolved to produce compounds that help them fight off invaders, among other functions.”

Camalexin, like other plant metabolites, is synthesized by specialized worker-proteins called enzymes that perform many of the cell’s functional duties. When the plant is under environmental stress, it activates the genes encoding these enzymes. The researchers set out to elucidate how a plant cell can rapidly fire up the production line and respond to external conditions or threats at the right time.

A cell’s genetic material encodes the recipes for making these camalexin-producing enzymes and all the proteins that the cell could need to conduct its necessary functions under a variety of conditions at every stage of its life. This is a lot of information. Which is why organization of the genetic code in the cell is so crucial.
​
“Imagine a cell’s genome is a massive library and each gene is a book, and each chromosome is an extremely large shelf,” Rhee said. “The cell has different mechanisms for quickly finding the gene it needs in this vast array of information, so that it can be transcribed and translated to make the encoded protein and respond to environmental conditions, including threats and stress.”

These strategies include adding or removing tags or marks in the packaging of all the genes and associated material—collectively called chromatin—which can enhance or inhibit expression of particular genes. Sometimes, both activating and repressing elements are present simultaneously, a phenomenon called bivalent chromatin.

Zhao, Rhee, and their colleagues were able to elucidate the existence of a never-before-characterized type of bivalent chromatin—they termed it a kairostat, from the Greek “kairos,” meaning at the right moment, and “stat,” meaning device—which keeps the biosynthesis pathway for camalexin inactive until there is a pathogen signal. Their findings indicate that both elements are needed to control the proper timing of the plant’s response to external stress.

“Camalexin and other defense compounds are often very expensive and toxic for the plants to make. So, it’s disadvantageous for plants to make them all the time,” said Zhao. “Plant scientists have known for a long time that these defense compounds are made just in time when a plant is attacked by pests and pathogens. We now have a new handle on a molecular mechanism that enables this precise timing of camalexin production.  This finding could inform strategies for fighting climate change and global hunger, or even the synthesis of plant-derived medicines.”
​
Looking ahead, the group wants to characterize all the proteins involved in establishing and removing epigenetic marks to identify more kairostats and better understand their role in environmental responses and other plant functions.