Decoding The Chemical Vocabulary Of Plants 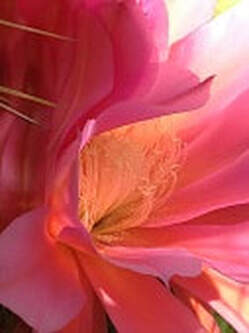 Desert flower photo by Seung Yon Rhee
Stanford, CA—Plants spend their entire lifetime rooted to one spot. When faced with a bad situation, such as a swarm of hungry herbivores or a viral outbreak, they have no option to flee but instead must fight to survive. What is the key to their defense? Chemistry.
Thanks to this ongoing conflict, plants have evolved into amazing chemists, capable of synthesizing tens of thousands of compounds from thousands of genes. These chemicals, known as specialized metabolites, allow plants to withstand transient threats from their environment. What's more, some of the same compounds benefit humans, with more than a third of medicinal drugs derived from plant specialized metabolites.
Understanding how plants evolved this prodigious chemical vocabulary has been a longstanding goal in plant biology. A team of Carnegie scientists led by Seung Yon Rhee and Lee Chae undertook a large-scale comparative analysis of plant genomes to investigate how specialized metabolism evolved. Their findings, as reported in Science, have major implications for the way scientists search for novel beneficial metabolites in plants.
To perform the study, the team developed a computational pipeline system that can transform a sequenced plant genome into a representation of the organism’s metabolism. This is known as a metabolic network.
"The key to our analysis, or any comparative genome analysis, is the consistency and quality of the data across species," says Chae. "Our pipeline ensures this consistency with validated levels of accuracy and coverage."
Importantly, the pipeline allows the team to produce a reliable metabolic network for any sequenced genome in about two days or less--a vast savings in time and resources when compared to the previously months-long process, notes Chae.
Using the pipeline, the team reconstructed and analyzed metabolic networks for 16 species in the green plant lineage, including flowering plants, algae, and mosses. They found that genes producing specialized metabolites exhibit unusual properties in the way they evolved, including their number and organization within each genome, the genetic mechanisms by which they form, and their tendency to be simultaneously activated.
Collectively, these properties represent a distinct signature of specialized metabolic genes that offers an innovative strategy for the discovery of novel specialized metabolites from various plant species. Such discoveries could have wide-ranging implications for many research fields, including agriculture, biotechnology, drug discovery, and synthetic biology.
"Despite our reliance on plant compounds for health and well-being, we know very little about how they are produced or the true extent of their diversity in nature," says Rhee. "We hope that our findings will enable researchers to use these signatures as a tool to discover previously unknown specialized metabolites, to investigate how they benefit the plant, and to determine how they might benefit us."
​
View on Carnegie Website