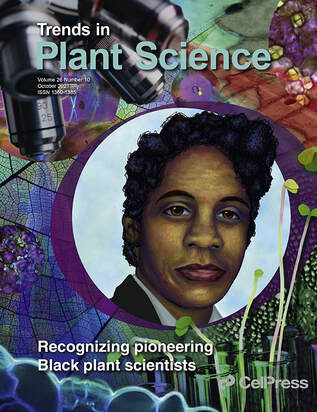 Washington, DC--All year round, our lives are shaped by events that were made possible by the often underrecognized work of Black plant scientists. From the refreshment of enjoying a cool scoop of vanilla ice cream on a hot summer day, to the thrill of peering through a microscope on the first day of school, we have Black scientists to thank for these and so many more of the experiences that enrich our minds and nourish our bodies.

Without the work of Edmond Albius, vanilla beans would be too difficult to cultivate for mass consumption. Albius, born an enslaved individual, was freed after his breakthrough, but never received any profits from it, although his discoveries regarding vanilla pollination changed the course of his country’s history.

The first woman to receive a Ph.D. in botany in the U.S., Marie Clark Taylor, revolutionized American education by promoting hands-on learning in the classroom. Thanks to her tireless advocacy, using microscopes to study live plant tissue became the standard in schools.

“By remembering the names, the lives and achievements of these scientists, the intellectual vibrancy of Black history can be, in part, un-erased. Embracing diversity will lead to new questions and new ideas that keep research moving forward,” wrote the exhibit designers.

Their efforts are part of the Plant Cell Atlas project, which aims to advance plant science to prepare for a growing population and a changing climate, as well as to make the field a more diverse and inclusive environment.
The exhibit, which went live on Friday, also includes George Washington Carver. Although his work with peanuts is more widely known by the public, his contributions to U.S. agriculture were much greater than the invention of a vast array of peanut products. His understanding and promotion of crop rotation restored the soil quality across the American South, where generations of cotton crops had depleted it of nitrogen.

A fellow legume researcher, Percy Lavon Julian’s work with the African Calabar bean altered medical history by isolating a compound that was used in the synthesis of the hormone Progesterone. Treatments for glaucoma, arthritis, and female infertility were made possible by his research and he was the first Black chemist inducted into the National Academy of Sciences.

“Black and Indigenous People of Color have pioneered scientific advances that have fundamentally shaped modern life,” wrote the exhibit planners. “The stories of these innovators are a crucial part of our scientific history and should be told to help break down barriers, celebrate the achievements of BIPOC scientists and highlight the importance of diversity in science.”
​
The exhibits can be seen at Morgan State University, Bowie State University, and Howard University until December 6, 2021.
​View on Carnegie Website.